Ten years have passed since Carina Seth Andersson designed a collection of vases for Svenskt Tenn. She started from the exotic items that Svenskt Tenn's founder Estrid Ericson brought home from her many trips around the world, and translated them to exoticness of our time. Winding forest roads, cones on the pathway, early dawn-fresh summer mornings and the scent of resin inspired her to create the vases Dagg (Dew), Stubbe (Stub) and Kotte (Cone).

The Dagg vase has become a modern classic in Svenskt Tenn's range, and it is often seen in interior design magazines and private homes around the country. Now, a decade after its first launch, it is presented in a new, green colour tone.

“Naturally, the vase has meant a lot. It is a utility item that has developed a life of its own. One can never know in advance how a product will be received, but you can have a hunch. If there is enough time for seriously working through the product, that will also show when presenting it to the public. It took a few years before the vase found a wider audience, but credibility is probably the key to its final success”, says designer Carina Seth Andersson, and continues;

“The vase is organic. It is made and interpreted by experienced hands. There is nothing static about it. Each vase is blown in the same mould, but depending on the glass mass and the heat, each one gets a slightly different expression.”

The Dagg vase is blown in graphite mould and manufactured at Skruf Glassworks in Småland, Sweden. Its popularity has had a major impact on the glassworks, which, thanks to the vase, has been able to recruit staff and open a new oven.

The specific shape of the product requires enormous precision of the glass blower, correct glass mass and right temperature. When making the vase, there are always at least two people involved. The first step is to collect glass from the oven and form a small glass ball; a so-called "post".

To this post you add some more glass mass until it is large and stable enough to carry the approximately 3.5 kilograms of heavy mass needed to blow the whole vase.

The hot glass mass is released into the graphite mould while the craftsman gently blows it into its right shape. After that, the glass is cooled in a refrigerator from 500 down to 35 degrees. This procedure takes about four and a half hours. Finally, the top is removed, and the edge polished to a smooth surface. 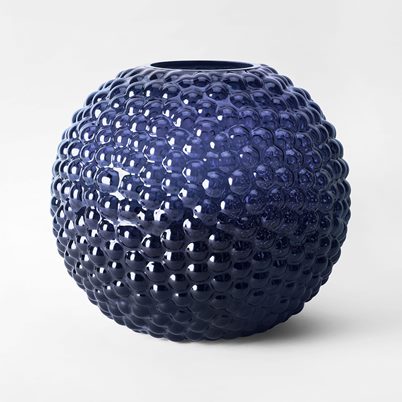 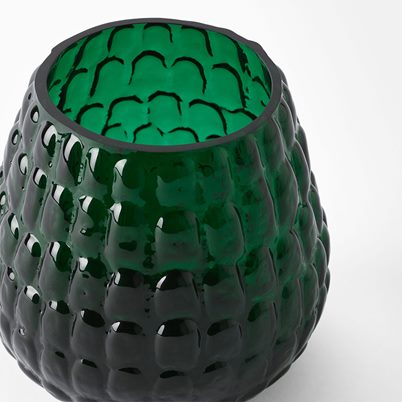 Out of stock
See all vases