Inspiration for the Holiday table setting 2022

A classic Christmas table setting in a historic setting, where grand, festive and sumptuous are the leading features. This is how we set the table for the holiday season 2022.

In the artists' home at Millesgården in Stockholm, we have set the table for a feast with candlesticks, hand-painted porcelain and magnificent table decorations. A beautiful Christmas table setting that brings to mind 17th-century still lifes, with sumptuous fruit platters, grapes and flowers.

Hand-painted pottery from Malaika Linens is combined with classic candlesticks designed by Estrid Ericson and Josef Frank. The glass dish ‘Fina Snäckan’ (Fine Shell) by Åsa Jungelius has been placed next to each place setting, together with brass details such as the Mermaid bottle opener by Maja Sten and the Triton coaster by Luke Edward Hall. Svenskt Tenn's linen napkins in the colours orange and cerise stand in beautiful contrast to the tablecloth in Josef Frank's green Aristidia print.

Aristidia is one of Josef Frank’s earliest prints. He designed it in the 1920s for Haus und Garten, his company in Vienna. It was originally called Tang, the German word for seaweed, but was renamed to Aristidia when the print was later produced in Sweden for Svenskt Tenn. For Christmas 2022, the pattern is relaunched in the green colourway that was printed for the first time in the 1920s, both as fabric, tablecloth, tray and cushion.

Maja Sten has always been fascinated by mermaids. Ever since she was a child, she has seen water and bathing as a source of both calm and energy: a moment to sink below the surface just to listen to your heartbeat. The bottle opener in the shape of a mermaid is an expression of this: an everyday object filled with meaning.

The deep platters with red, hand-painted flowers are Svenskt Tenn's latest addition to a series of pottery object from Malaika Linens. The platter is a beautiful example of the original pottery that is made by hand in Fayoum, Egypt. In this year's classic Christmas table setting, it is combined with a hand-painted saucer from French Gien, clear glasses and red cutlery from the classic Bistro series.

The brass napkin rings and coaster are new additions to the range, launched for Christmas 2022, designed by Luke Edward Hall for Svenskt Tenn. Just like the brass decorations in his collection, the design is influenced by baroque and rococo motifs, inspired by the treasures of the sea. The coaster is a representation of Triton, the Greek god of the sea.

The placemats with fruit motifs and a rainbow frame are also new additions to the range, designed around 1950 by Josef Frank for Svenskt Tenn. The motifs of lemons, oranges, apples, pears, plums and grapes are all drawn in a typical Josef Frank manner. These motifs are among the last prints created by Josef Frank, and they are intended only for placemats and coasters.

The dining chair 1165 in mahogany and rattan is a timeless classic in Svenskt Tenn's range, designed by Josef Frank in 1947. For the Christmas dining room, we have combined the chair with the longest dining table in the range, designed in the same decade. With its four additional panels, it can be 390 centimeters long. The rounded corners give the rectangular shape a softer and more playful impression. As so often in Josef Frank's designs, the wood's own liveliness is used as the only décor. 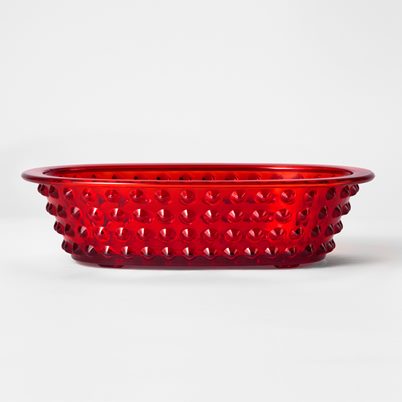 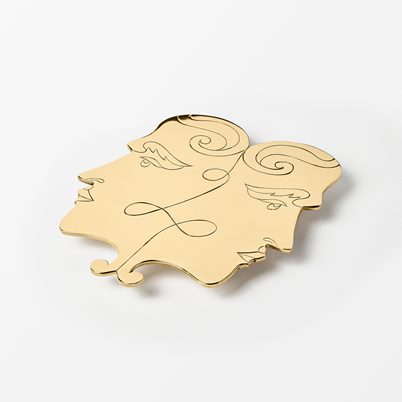 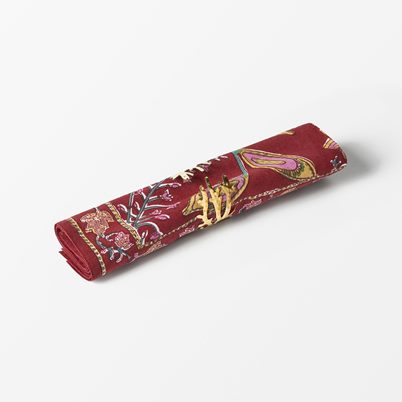 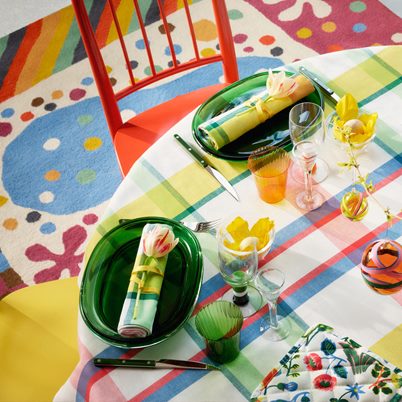