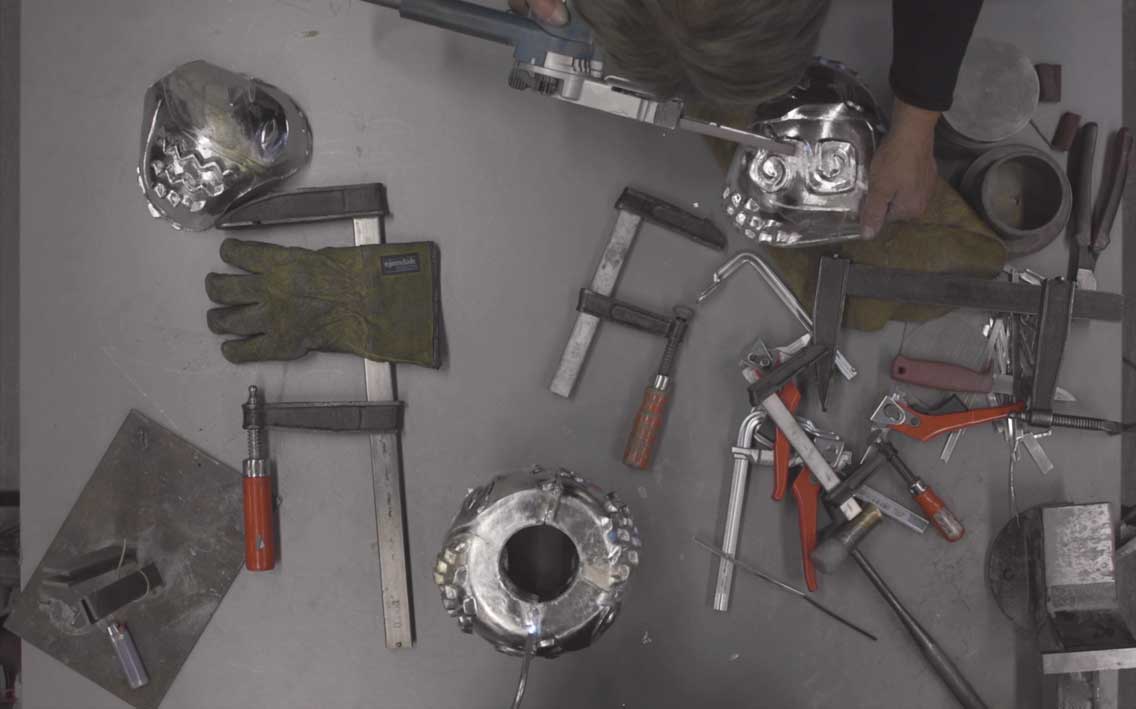 The making of pewter items at Humstorp Metal Workshop.

How does one become a responsible consumer in a world of environmental threats? This question concerns many people today. Svenskt Tenn decided to clarify the issue and brought together Lisanne Fransen, curator of the autumn exhibition Local Design, and Carl Folke, Director of the Beijer Institute of Ecological Economics at the Royal Swedish Academy of Sciences.

Lisanne Fransen - Svenskt Tenn has a long history of artisan production in Sweden and this is something I wanted to highlight in the exhibition. I meet many young people who want to slow down their rate of consumption and are looking for new ways of relating to how they consume and the world and times in which we live. They eat crisps made of locally grown potatoes, drink beer from Swedish micro breweries, buy locally and organically grown vegetables and understand that it is not sustainable to purchase new home furnishings every two years. Many people really want to do what they can to curb the environmental threats we face. They just don’t know how!

Carl folke – In a world where most things are made on the other side of the globe it is, of course, difficult to check how they are produced. Sweden is a small country and therefore, in global terms, it has a relatively small impact on climate change and other environmental threats. Our consumption, however, leaves a large footprint and less and more conscious consumption is an effective means for an individual to contribute to alleviating environmental challenges. I am quite hopeful. Today, many people think about their consumption and I see clear signs of changing attitudes.

Lisanne – But it feels like it’s going so slowly?!

Carl – No, I do not agree that it’s going slowly. I think we are experiencing a renaissance: many people are reformulating their values and new value systems are emerging. That I am more positive than you probably has to do with the fact that I have a longer perspective on environmental issues. When I began my research in 1983, ecology and economy were two completely different disciplines. Ecology was seen as dealing with only animals and plants and that nature could be included in economic reasoning was unheard of. As I see it, since the Beijer Institute founded the Stockholm Resilience Centre in 2007, the awareness that humans are part of nature has increased dramatically. The most apparent changes are perhaps to be found in the food sector. I also see changes in attitude in many other contexts as well.

Larsson Korgmakare in the Old Town of Stockholm.
Kasthall in Kinna has woven and tufted carpets since 1889.

Lisanne – What else do you do at the Beijer Institute?

Carl – We are a platform that enables us to understand the world in which we live. We are an interdisciplinary research institute that fosters understanding of the relationship between humans and nature. Needless to say, the connection has always been there, but it has been largely lost, especially in the last two to three generations.

Lisanne – What do you mean?

Carl – We have several decades of industrialism behind us and many people have gradually become alienated from nature and take it for granted that nature will provide us with “free subsidies”. Today, we are paying the price for this and the world of planetary boundaries that we now live in requires new measures to ensure our own welfare. One of the many signs that we are creating such measures is our renewed appreciation of craftsmanship and local production.

Carl – At the Beijer Institute we work expressly with creating theoretical models and terminology that are adapted to our time. For example, we helped to introduce and establish terms such as natural capital, ecosystem services, ecological footprint and resilience – the ability to live with change and to continue developing – and via countless reports we have influenced governments, UN agencies and the World Bank.

Lisanne – I am 27 years old and many of my peers are developing what one might call “climate depression”. We feel so powerless in the face of all the threats to the environment, and obviously we want to do what we can to ensure a viable future. How do you think we should explain, in the simplest way possible, the environmental issues to people who are not so familiar with them?

Carl – I usually explain it by looking at things in a long historical perspective. During the last ten thousand years, the Holocene, which is the geological epoch we have lived in, has bestowed upon us humans very favourable living conditions. In the beginning of the 19th century, the planet had one billion inhabitants. Today there are over seven billion of us and this has been possible because we have enjoyed an extraordinarily stable climate. However, according to research, we are now about to enter into a new geological epoch, the Anthropocene, the human era on earth. An epoch when human impact on the planet constitutes a global force that is capable of changing the earth’s biophysical systems and is comparable to the geological forces that have shaped the earth throughout the ages. Today, we are challenging the very foundations of how the earth works, foundations upon which our prosperity rests. Therefore, it is high time to bring to the fore the economic value of natural capital.

Lisanne – But will we succeed? Will there not always be room for cheap goods that do not take nature into account but still provide growth? Where there is a demand there is a supply, as the saying goes.

Carl – I believe we will succeed because I see that more and more people are actually changing their patterns of consumption. At the Beijer Institute, we prefer the concept of emergence rather than growth. Emergence is about new ideas that often emerge from nowhere. In fact, it is often sufficient with a handful of people with a new perspective on an issue for a process of change to commence. Even a small vanguard can start to shake the foundations of a given structure. Just the fact that you and I are sitting here today discussing consumption is part of the renaissance I’m talking about.

Lisanne – Buying handcrafted and locally produced products is, of course, more expensive than buying mass-produced merchandise from the other side of the globe. However, there are great social benefits to be had by avoiding long transports and another positive is that knowledge and jobs remain in Sweden. In addition, handcrafted products often last for generations and therefore prove to be more economical in the long run also for the individual consumer. Is this the type of long-term process you want to see in new patterns of consumption?

Carl – Shopping locally and thinking long term are good things. But it is obviously not enough. In order for new value systems to arise we need not only a better understanding of the relationship between humans and nature but also a deeper understanding. We must understand that no matter what we do with it the planet will always exist. Rather, the question is whether we will remain on it or not. We must realise that it is we who are dependent on nature. Not the other way around.

Svenskt Tenn is owned by the Beijer Foundation. Surplus generated by the company goes to research in areas such as sustainability and environmental conservation at the Beijer Institute at the Royal Swedish Academy of Sciences in Stockholm. The institutes research provides a deeper understanding of the interactions between ecological systems and societal and economic development. The goal is to identify pathways to a sustainable future.