Josef Frank has had an enormous impact on the history of Swedish design. Despite the fact that he was already 50 years old when he fled the burgeoning antisemitism for Sweden and Svenskt Tenn, the Austrian architect is considered to be one of Sweden’s most important designers of all time.

At Svenskt Tenn, Josef Frank received both a unique stage and invaluable help from Estrid Ericson, who was an exceptionally artistically inclined producer. He awarded her by being extremely productive: there are over 3,000 sketches and 250 textile prints signed Frank in Svenskt Tenn’s archives.

Josef Frank (1885-1967) grew up in Vienna in an assimilated Jewish family and studied architecture at Konstgewerbeschule. In the 1920s he designed housing estates and large residential blocks built around common courtyards in a Vienna with severe housing shortages. In 1925 he started the Haus & Garten interior firm together with architect colleagues Oskar Wlach and Walther Sobotka.

Josef Frank was one of early Vienna modernism’s foremost figures, but already in the beginning of the 1920s he started to question modernism’s growing pragmatism. He had little appreciation for the French architect Le Corbusier’s belief that a house should be “a machine for living in”. He was against puritanical principals and on the contrary, feared that standardised interiors would make people all too uniform.

Josef Frank represented a freer, more artistic style ideal and he developed his own type of modernism where values like comfort, hominess and a wealth of colour were at its core. He resisted limitations and models for his furniture and textiles came from across all boundaries both in time and space. He perceived tubular steel furniture as a threat to humanity. On the contrary he wanted to include nature’s colours and forms in his interiors to be able to breathe and exude freedom even in closed rooms. For the same reason he preferred furniture that people could see through. A chair should have an open back and a cupboard should be on legs that were so high that one could distinguish the borderline between the floor and the wall.

"standardised interiors would make people all too uniform."

Josef Frank began working at Svenskt Tenn in 1934 and just a few years later, the Frank-Ericson duo made their international breakthrough. Svenskt Tenn’s exhibition room at the World Expositions in Paris in 1937 and New York in 1939 was completely contrary to the ideal of the time with its bold contrasts in materials, colours and prints. The duo received a great deal of attention and became, somewhat paradoxically, the model for the expression “Swedish Modern”.

With a strong botanical interest Frank developed his own floral print already in his youth. Favourites like lawn daises, tulips, roses, bindweed, forget-me-nots, violets, lily of the valley, crocuses and grape hyacinths were blended with pure fantasy flowers, frequently illustrated with a light touch.

With his prints, which were often based on the colours and forms of nature, in almost imperceptible repetition, Frank wanted the observer to feel freedom and a change of pace even in confined rooms:

“The monochromatic surface appears uneasy, while prints are calming, and the observer is unwillingly influenced by an underlying slow approach. The richness of decoration cannot be fathomed so quickly, in contrast to the monochromatic surface which doesn’t invite any further interest and therefore one is immediately finished with it.”

“The monochromatic surface appears uneasy, while prints are calming"

During the Second World War, Josef Frank was forced into exile yet again. At the height of the war he fled to Manhattan and the border between fantasy and reality where his tree of life, full of flowers and fruit came to be. This resulted in a number of textile designs, including the 50 prints that he gave to Estrid Ericson as a 50-year birthday present on September 16, 1944. Sweden’s Prince Eugen was one of many who rejoiced. He felt that the new designs actually exceeded those of the legendary print designer and Frank role model, William Morris.

And that is what happened when an architect from Vienna, on the escape from Nazism, raised Swedish design to new heights.

Aristidia is one of Josef Frank’s earliest prints. He designed it in the 1920s for Haus und Garten, his company in Vienna.

In Josef Frank’s dreamlike wallpaper he combined the plants of the real world with colourful flowers of the imagination.

Josef Frank's "Spider lamps" are characterized by the naked, visible light bulbs - a wink to the Art Noveau era and the birth of the electric lamp.

Josef Frank began designing stools for his own company Haus und Garten in the mid-1920s. During his active years he created about thirty different variants.

Already as a child, Josef Frank had a strong botanical interest, and as a designer he expressed this by composing his very own flora.

Josef Frank and Estrid Ericson were fond of map prints, and Josef Frank created a total of four during his years at Svenskt Tenn.

Give your home a warm and comfy expression with Svenskt Tenn’s timeless selection of rugs by Josef Frank.

Chair P4’s and P5’s original sketches are preserved in Svenskt Tenn’s archives, and are manufactured today with the same technique as then.

Coffee table 2139 combines the round shape with Josef Frank’s typical coamings. Learn more about the coffee table and the history behind it here.

The candle holder is classic and timeless in its form, and has been part of Svenskt Tenn's range for almost 70 years.

During World War II, Josef Frank went into exile and travelled from Sweden to New York. There he created an outstanding collection of prints.

Vänskapsknuten has become a classic in Svenskt Tenn’s range, both due to its form and its meaning. Here you can read all about the history.

Josef Frank was inspired by the material world of East Asia and made use of rattan, bamboo and other materials, which recur in a number of his designs.

Josef Frank used colours and patterns, included both high and low, and did unabashed borrowing from various cultures and eras.

Svenskt Tenn's range includes, among other things, five glass vases designed by Josef Frank; all in different sizes and with undulating shapes.

Josef “Pepi” Frank’s botanic designs mix real flowers such as tulips, forget-me-nots and lily of the valley with plants and fruit motifs, inspired by different places and cultures of the world.

Josef Frank had his own philosophy regarding how to design a comfortable chair. It should not be the centre of attention, nor should it be regarded solely as a seat, but rather exist to serve a higher purpose.

It’s now 85 years since the arrival of one of Sweden’s best-known designers, who enriched his new home country with innovative designs, vibrant patterns and timeless interiors.

Josef Frank’s many print designs mix favourites such as tulips, forget-me-nots and lily of the valley with meandering lianas, grapevines and fruit motifs.

Patterned black textiles and dark furniture by Josef Frank are displayed together with the Dagg vase by Carina Seth Andersson, in solid black colour.

Josef Frank has had an enormous impact on the history of Swedish design. The Austrian architect is considered to be one of Sweden's most important designers of all time…

'Mirakel' (Miracle) is one of Josef Frank's earliest prints, created during the latter half of the 1920s. It is adorned with large-scale fantasy flowers, winding lianas and a sea of dots.

When Josef Frank corresponded with his friend Dagmar Grill in 1947, he was inspired to create thirteen fantasy houses, which in many ways came to embody his vision as an architect…

Josef Frank was not only an architect and a designer, he also painted hundreds of paintings in watercolour. His subjects were extensive landscapes, cityscapes and still lifes of flowers.

When Josef Frank (1885-1967) started his collaboration with Svenskt Tenn’s founder Estrid Ericson in 1934, he was already established as one of the leading architects and designers.

Josef Frank designed several fantasy houses that were commissioned by his friend Dagmar Grill. In designing them, he wanted to demonstrate that a house should reflect its owner and not vice versa. 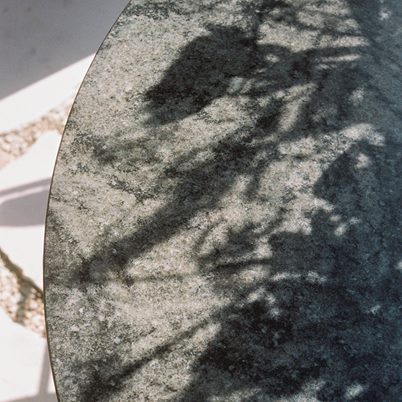 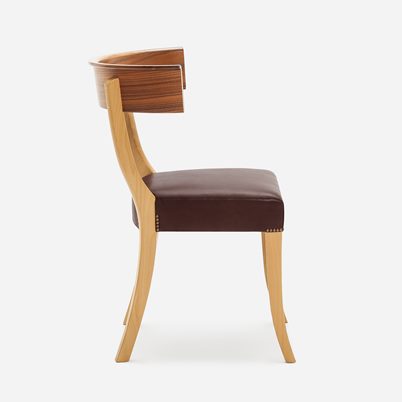 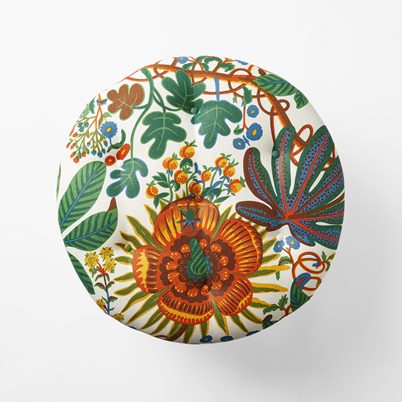 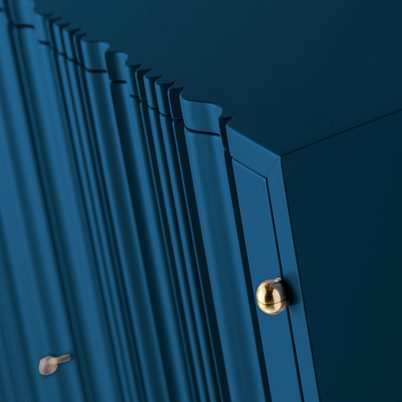 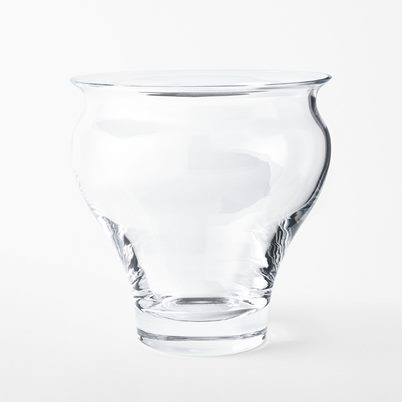 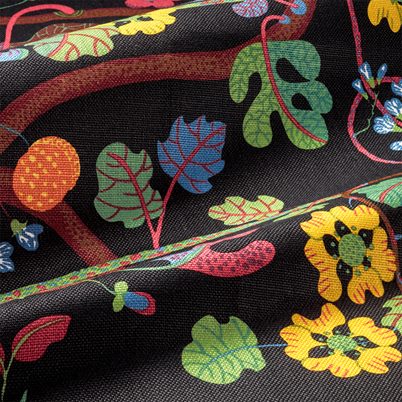 Made to order
Other variants
J. Frank, 1930s