The floral Mille Fleurs print was originally called Tulipan and was designed in the 1920s for Josef Frank’s own company Haus & Garten in Austria. He took the pattern with him when he moved to Sweden and in the 1940s, it was redesigned to suit modern printing technology.

The way fabrics were being printed was evolving and as a result, the fabric was given a more simplified appearance. Mille Fleurs, or A Thousand Flowers as it means in English, became the fabric’s name and it depicts a sea of spring flowers such as tulips, bluebells and forget-me-nots.

Mille Fleurs is more than just a beautiful name – it’s a concept that has been in the art world ever since the Middle Ages. It is best described as an unorganised and irregular pattern of flowers in different shapes and colours. The style was picked up and became popular again in the 1800s with print designer William Morris taking the design world by storm.

HOW TO USE THE FABRIC

Unlike Svenskt Tenn’s other classic and large-patterned fabrics, Mille Fleurs is a fabric with a small pattern. Each flower is individually designed for a unique and versatile look.

The fabric works equally well on smaller products like lampshades and cushions as on larger interior pieces such as curtains and tablecloths. 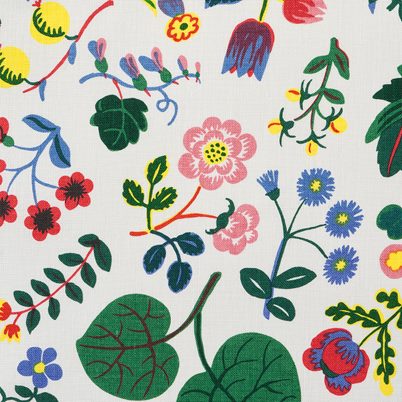 In stock
See all textile prints by Josef Frank